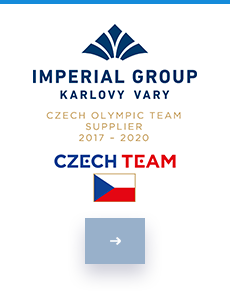 Home» About The Company » Basic Information

The Imperial Karlovy Vary company is one of the most important providers of complex spa and wellness care in the Czech Republic. It has helped build, to a great extent, the good name of the Czech balneology.

Hotel Imperial provides their guests accommodations of *****, Spa Resort Sanssouci accommodations of ****. Each of the hotels contains a modern balneology facility, which offers a few dozen medical and wellness procedures. There are also luxury restaurants with a wide selection of international specialties and diet cuisine. Also, the assortment of additional services is great - a vast sports center, our own travel agency, services for children, etc.

„By its vast investments in hotel reconstructions, modernization of the balneology technology and quality development of human resources, Imperial Karlovy Vary has achieved an excellent level of all its services“.

The hotels of Imperial Karlovy Vary provide Karlovy Vary’s traditional spa treatment based on using the local thermal-mineral springs and peloids. Treatments in the Imperial and Spa Resort Sanssouci also use the latest balneology methods and procedures. The connection of the traditional treatment with modern balneology and with an individual approach to each patient brings the maximization of the effect of the medical therapies to the patients.

„Thanks to the connection of the traditional medical sources and anactive approach to modern balneology hotel Imperial and Spa Resort Sanssouci have achieved excellent, long-term results both when treating the ill and in prevention of civilization diseases.“

The received Czech and international awards are proof of the quality of the Imperial Karlovy Vary company. The Hotel Imperial is a seven-time and Spa Resort Sanssouci three-time award winner of the World Travel Awards Czech Republic’s Leading Spa Resort. The company Imperial Karlovy Vary Group, furthermore, received the Czech Republic Spa Award, as well as several other important awards.

„World Travel Awards separated excellent from good. Only those who continuously exceed the expectation of its customers are awarded this prize.”